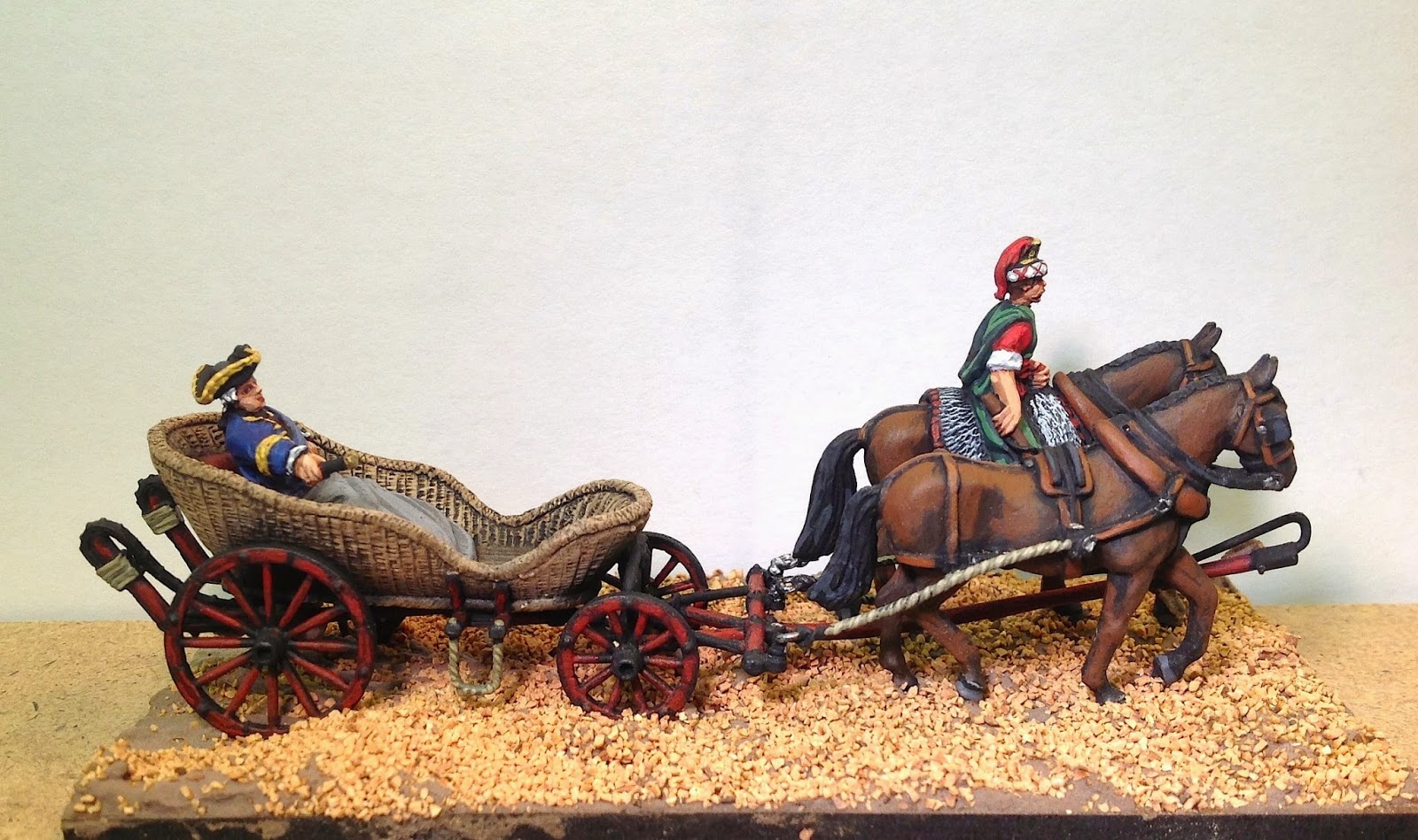 I initiated a Kickstarter campaign to provide crowd funding for a new range of SYW Austrian and Russian artillery equipment. You can click on the link below to read more details about the campaign

The initial goal of $3,000 has been reached so that means that the Austrian artillery equipment is now funded and can go into production. This lot will include the Liechtenstein System Austrian 3- pounder, the 6-pounder, the 7-pound howitzer, the 12- pound field cannon, and an Austrian limber model. The models have already been sculpted and are on their way to Griffin Moulds for production.

Next we have a stretch goal of $6,000 and if total pledges surpass this amount, it will "unlock" the  mighty 12-pound Prussian fortress gun, better known as the "Brummer", which Frederick used to great effect at the Battle of Leuthen in 1757. As of this writing, we are only $548 away from hitting the stretch goal.

After this, there is a stretch goal of $11,000 that will unlock the Russian artillery crews and the Observation Corps artillery crew. Needless to say, if you have the new Minden Russian cannon, then you are going to need some crew too.

I hope that we can count on your pledge support. There are seven pledge levels of $100 or less and as low as $25 to make it easy for you to get started. We also have higher pledge levels as high as $2,000, but the $100-$200 pledge range seems to be most popular.

The campaign closes on October 12, 2014 and I expect to have all of the Austrian and Russian cannon in production by December 2014, so there is a quick turn around and you won't have to wait a couple of years to get your rewards from the program.

If you have read this far, then I thank you and hope that you can support my Kickstarter project at any level. Only $548 to go to unlock those Brummers.

I am changing the way that I will be packaging the rank and file marching figures, from packs of 4 figures to packs of 8 figures. Some of the firing and skirmishing figures will now be in packs of 6 figures. Command pack contents will remain unchanged.

The reason for the change is that I can bring more inventory to conventions in a fewer number of bags. So while this will result in a higher price per pack (due to having more figures in the pack), the price of a foot figure remains at $2.00.

At the same time, I regret that I will have to increase the prices for horses, which in turn, will increase the price of a cavalry pack or a mounted officer. Mounted figures will now be priced at $6.00 each versus the old price of $5.25 per horse and rider. Basically, I was underpricing the horse since I acquired the Minden range in October 2013. Now after six months of shipping inventory across the pond, I have a better idea of what my costs are, leading to the increase in horse prices.

Shipping prices will remain the same at $10.00 per package shipped regardless of the weight for international orders and $5.00 for all domestic US orders. Paypal fees are extra.

*************
I have most of my inventory bagged under the new system, so the plus to all of this is that I can process and ship orders more quickly. Now, I can reach into a bin and pull out the desired pack rather than hand counting each individual figure.

************
Now that we have virtually all of the new AWI cavalry either in production or about to be in production (end of April 2014), I want to add some new figures to the Minden range.

I can say with certainty that the French Cuirassiers du Roi in bearskins will be at the top of my list and probably French Cavalrie in bearskins and Austrian Horse Grenadiers will follow closely behind. As much as I would like to add more Prussians and Austrians, I feel that we need to fill in some of the holes in the French and British/Hanoverian armies.


I received the first 16 AWI dragoons yesterday, hot off the spin casting machines at Griffin Moulds. I will be processing Kickstarter rewards first, but after that the figures will be available for purchase by anyone. There are 8 American 1st Continental dragoons and 8 British 16th Light Dragoons.

If you were not a KS backer, you can place a "pre-order" now and I can probably ship your order in about 2-3 weeks (to allow enough time to send out the KS rewards first). No money is needed now, just an indication of your interest in particular figures is all that I need so that I can order more stock.

All figures are $5.00 USD including rider and horse. Shipping charges are at a flat rate of $5.00 USD in the USA and $10.00 USD for the rest of the world. In most cases, the flat rate international shipping equates to a savings of 15% to 20% on your order.

To order, send me an e-mail with your order for individual figures at:
fife_drum_minis@yahoo.com


Stock codes for the 16th Light Dragoons are as follows:

If you want to create a regiment in a formal pose with shouldered swords, then use the BC-010 officer, BC-011 trumpeter, and BC-013 trooper in coat to form the core of your regiment. You can also add a figure or two of the BC-014 trooper wearing a hunting shirt. On campaign, there should be some variation in the uniform. The BC-014 trooper with rested musket would also work with the fellows with the shouldered swords.

If you want to add some skirmishers, then the BC-010 officer pointing would look like he is directing a piquet line of the BC-015 firing pistol, BC-016 firing carbine, BC-017 reloading, with a couple of BC-014 rested carbine poses forming your reserve behind the skirmish line.

Stock codes for the 1st Continental Light Dragoons are as follows:

The topic of Austrian senior generals' uniforms came up on TMP today, and the post asked which Minden figures would be suitable for generals and higher. It looks to me like the Austrian Mounted Colonel figure (MA-006) with lapels will work for the two coats depicted on the bottom row of the above scan: General de Bataille (left) and Feldmarschell Lieutenant (right).

"General officers of most European armies wore no specific uniform indicative of their rank, this was not the case in the Austrian army. The basic uniform for General officers was a white coat, without turnback or collar, the lining of the coat was red. For generals of infantry the coat had lapels, those of the cavalry had none.  The cuffs, lapels (if infantry), waistcoat and breeches were red. The coat itself, as well as the cuffs and waist coat were richly decorated with braid, according to the rank of the wearer.

All lace with the exception of the Feldmarschell was straight edged. Lapels where worn had the lace continued around their outer edges. All buttons were gold, the tricorn had a wide straight edged band of gold braid around the edges. The waistcoat sash ws of cloth of gold with black silk threads running through it, a black cane with a gold pommel was carried. Shabraques were red and richly decorated with gold lace." (The Uniforms of the Seven Years War - page 22).

In the event that the scan is too small to read, here is the text:

Feldmarschell (upper left & right figures). Coat without lapels. Two bands of gold lace, one narrow and straight edged, one wide and wavy edged down each edge of the coat front. The cuffs and pocket flaps were also laced in this manner, as was the waistcoat.

Feldmarschell Lieutenant. (lower right figure). Wide gold border down each edge of the coat front, double gold border around the cuff tops and pocket flaps. The waistcoat was laced similarly.

The Minden figures for Charles of Lorraine (PER-006) and von Loudon (PER-007) are suitable to depict the Feldmarschell uniform coat.


While the original Greenwood & Ball book is out of print, you can purchase a revised, reprinted version from Nigel Billington at:

The price is British Pounds 12.50 for the book. Nigel also publishes the Greenwood & Ball book on Prussian Uniforms, as well as his own authored book on Russian army uniforms. All three books are priced the same. Nigel has corrected some of the errors found in the books and he has also added new material. So it is well worth visiting his web site to purchase these booklets.
Posted by Der Alte Fritz at 5:46 PM 1 comment: